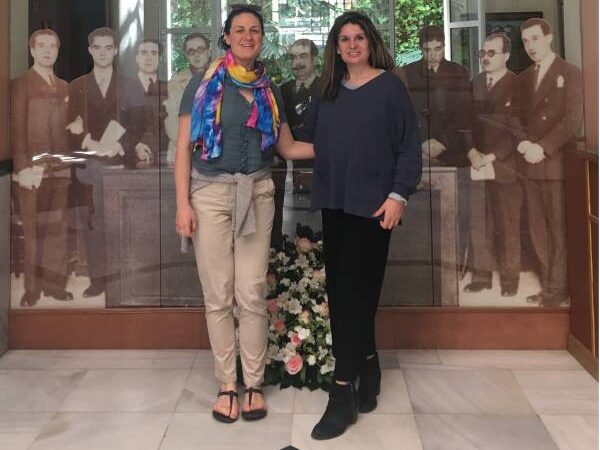 Britons are never more comfortable than when talking about the weather.John Smith, Flickr.

Whilst in Seville, Spain, I went to the Ateneo De Sevilla, a beautiful cultural centre which gives space for authors to share their work, as well as being the site of some of Seville’s important cultural heritage.

I met Rocio Lara Muñoz, a journalist who works at the Ateneo. She told me about its history, and the important work Spanish writers have done to ensure that Sevillian culture continues to operate and benefit society.

Spanish writers have done to ensure that Sevillian culture continues to operate and benefit society.

José María Izquierdo (1886 – 1922), a writer who was an active part of the Ateneo, was also a great promoter of the Cabalgata de los Reyes Magos (Three Kings Parade) – a festival celebrated annually throughout Spain on 5th January. Izquierdo, along with a group of contemporaries, is noted for founding this tradition in Seville, and ensuring it fulfilled its purpose of benefitting and brightening the lives of the poorest children in the city. Indeed, he took part, as one of the three ‘Magos’, or Kings, parading through Seville, visiting institutions such as orphanages and distributing sweets, but also other donations, to poor children.

Seville celebrated 100 unbroken years of this festival in 2018. The Ateneo hosts a statue to mark Jose María Izquierdo’s indispensable part in this important humanitarian initiative.

The Ateneo was also the place where a group of writers, known as the Generation of 27, gathered in December 1927 to commemorate the third centenary of the death of the poet Luis de Góngora. They comprised “The greatest exponents of Spanish avant-garde Literature of that time”, and are pictured above: Rafael Alberti, Federico García Lorca, Juan Chabás, Mauricio Bacarise, José María Romero Martínez, Manuel Blasco Garzón, Jorge Guillén, José Bergamín, Dámaso Alonso and Gerardo Diego.

Many thanks to Rocio for her time and this impromptu meeting, which enabled me to discover something of the culture and history of Seville – and the contribution of writers. I also attended a book presentation at the Ateneo while I was in town – a convivial occasion with  music, discussion and reading, where the room was overflowing and is clearly home to a vibrant community of culture enthusiasts. The Ateneo is a great place to go for any writers or visitors to Seville, to discover its cultural history and to engage with its important work preserving, supporting and continuing the existence of culture in the city.